The best of the wildlife photography awards 2016 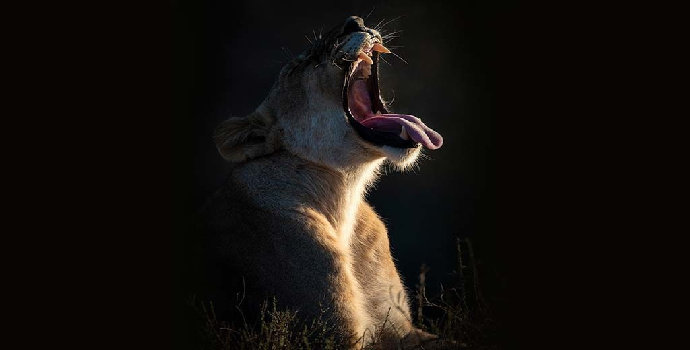 1. Entwined Lives, by Tim Laman,
US winner, Wildlife Photographer of the Year

An endangered young male Bornean orangutan climbs more than 30 metres up a tree deep in the rainforest of Gunung Palung national park on the island of Borneo, West Kalimantan, Indonesia. 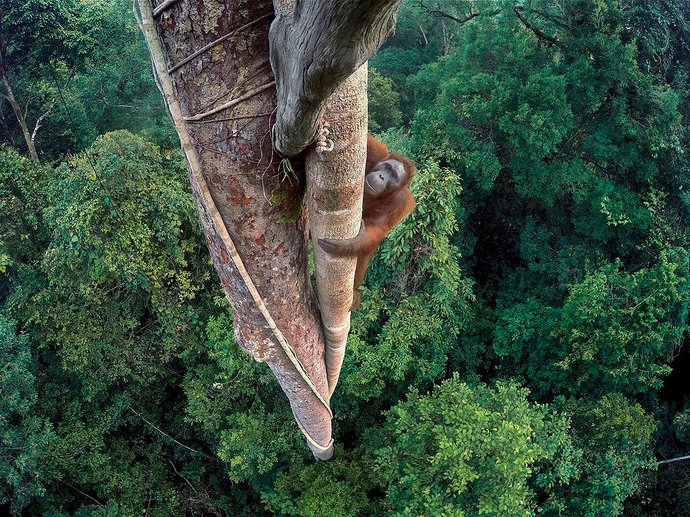 Nothing prepared Hilton for the sight of 4,000 defrosting pangolins (five tonnes) from one of the largest seizures of the animals on record. They were destined for China and Vietnam for the exotic meat trade or for traditional medicine. Pangolins have become the world’s most trafficked animals, with all eight species targeted. 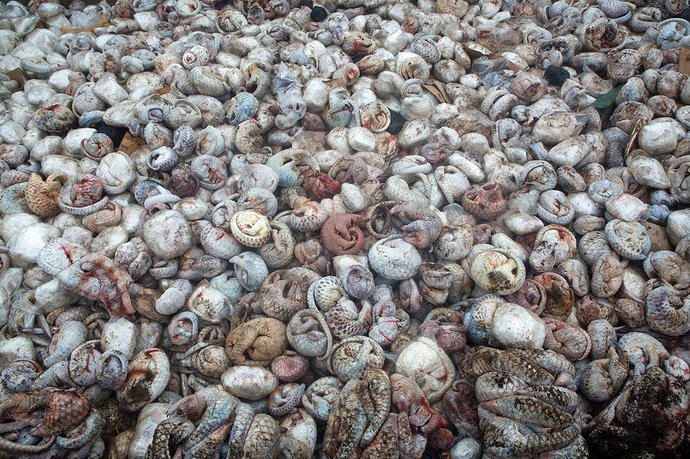 3. The moon and the crow, Gideon Knight,
UK winner, Young Wildlife Photographer of the Year

A crow in a tree in a park: a common enough scene. It was one that Gideon had seen many times near his home in London’s Valentines Park. But as the blue light of dusk crept in and the full moon rose, the scene transformed. 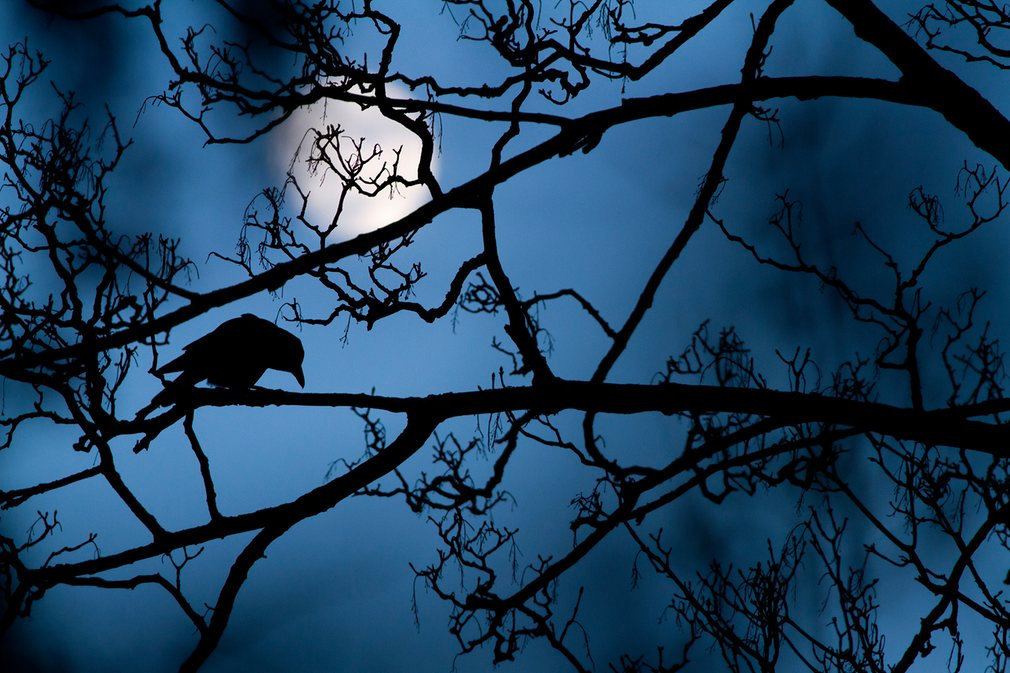 Grey langurs play in the evening light of Bandipur national park, Karnataka, India. Vijayan travelled from Canada to India to photograph tigers and leopards. After a day on safari with no sight of the big cats, his attention was caught by a group of grey langurs playing on a nearby tree. 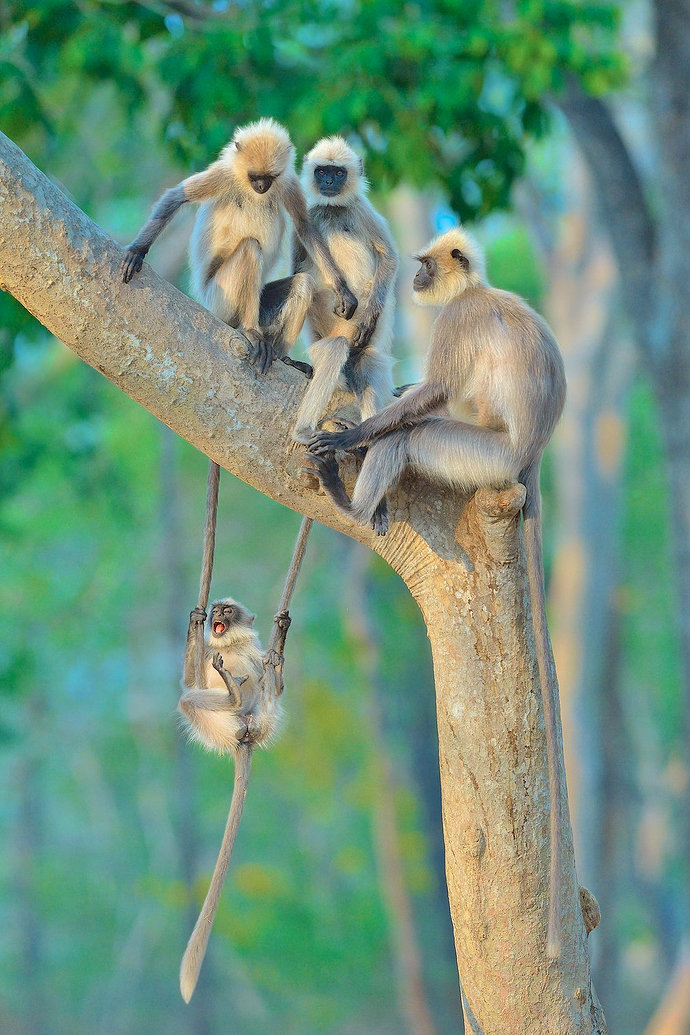 A lion’s mane jellyfish in St Kilda, off the island of Hirta, Scotland. 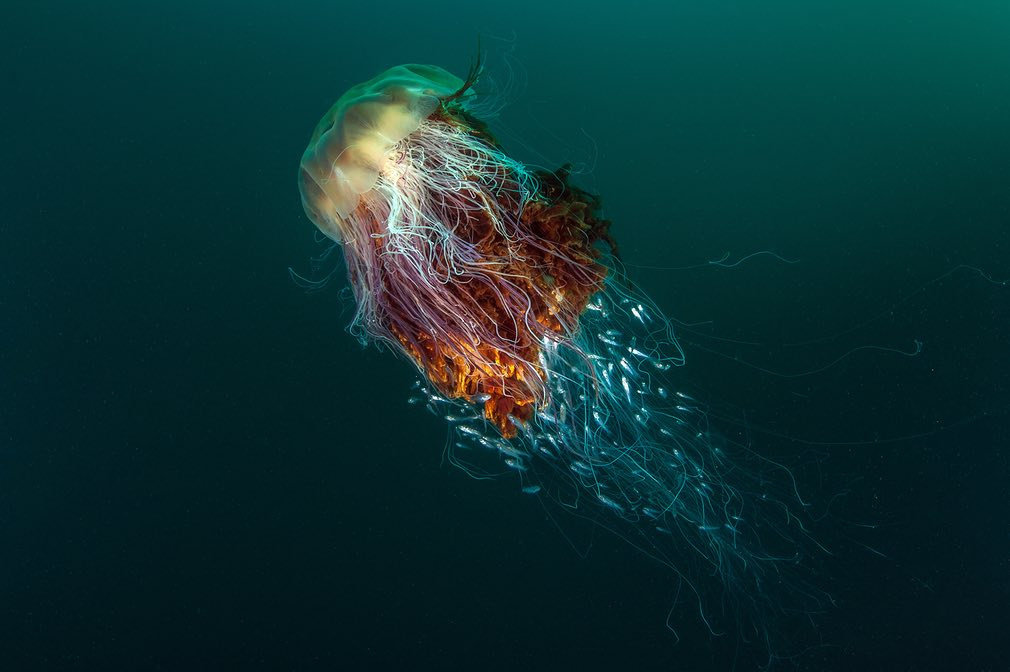 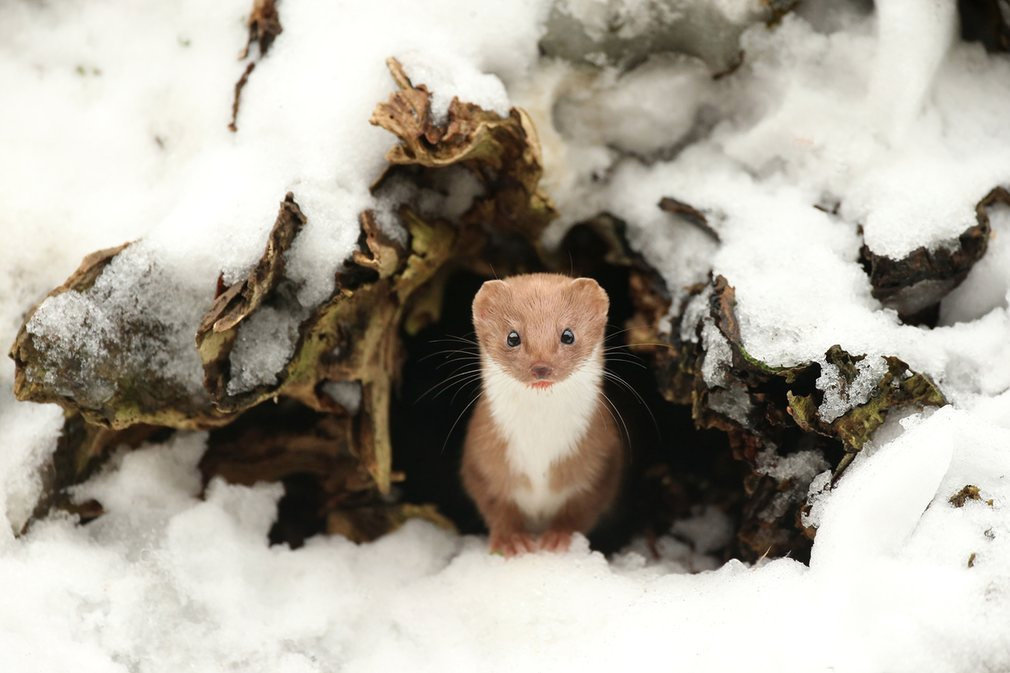 Sardines in South Africa are preyed upon by cape gannet birds and common dolphins. The hunt begins with common dolphins that have developed special hunting techniques. With remarkable eyesight, the gannets follow the dolphins before diving in a freefall from 30 to 40 metres high, piercing the surface of the water head first at a speed of 50mph to get their fill of sardines. 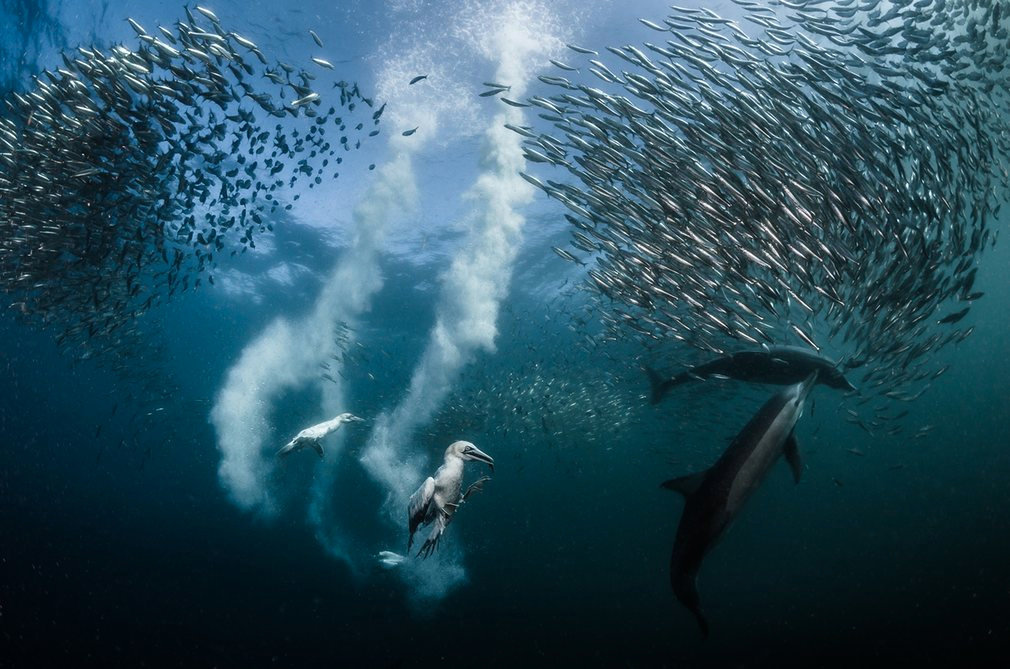 Fry of a peacock bass hover around their mother for protection against predators. Peacock bass, part of the cichlid family, exercise excellent parental care and will protect their young against any threat that approaches them. This tropical species from South America was intentionally introduced in south Florida during the 1980s to control the African tilapia, another invasive species. 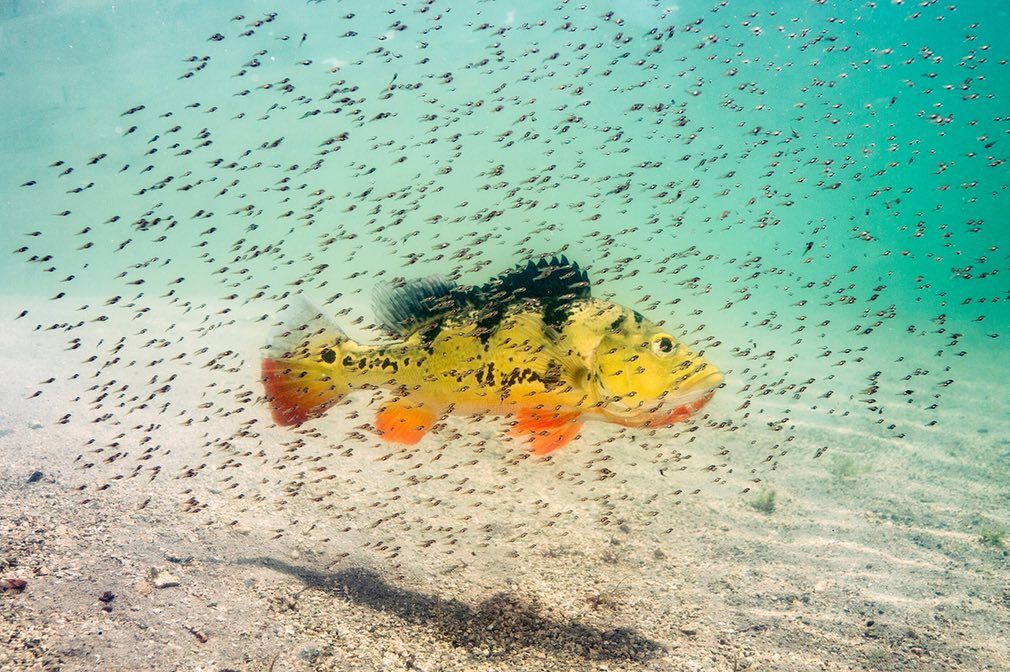 Polar bear remains on an island in northern Svalbard, Norway. We do not know whether the bear died from starving or ageing, but starvation is more likely if the teeth are good quality. Such remains are often found today, as global warming and melting polar ice influences the polar bear population. 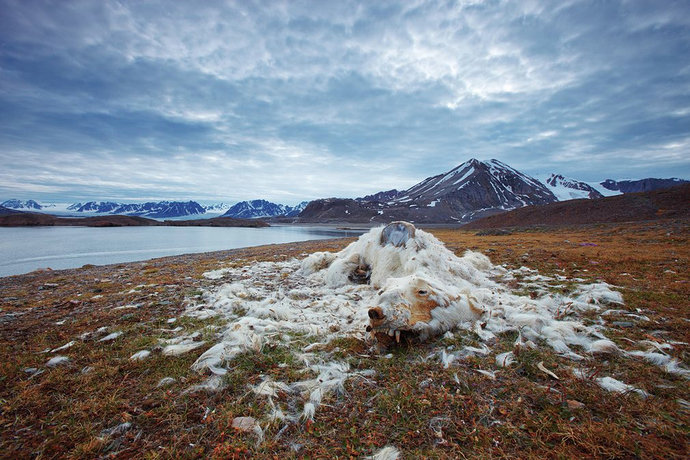 10. A Bornean orangutan by Tim Laman,
from a series that won first prize stories in the nature category, World Press Photo awards

A Bornean orangutan is seen through the smoke of forest fires along the Mangkutup river, central Kalimantan province, Indonesia. 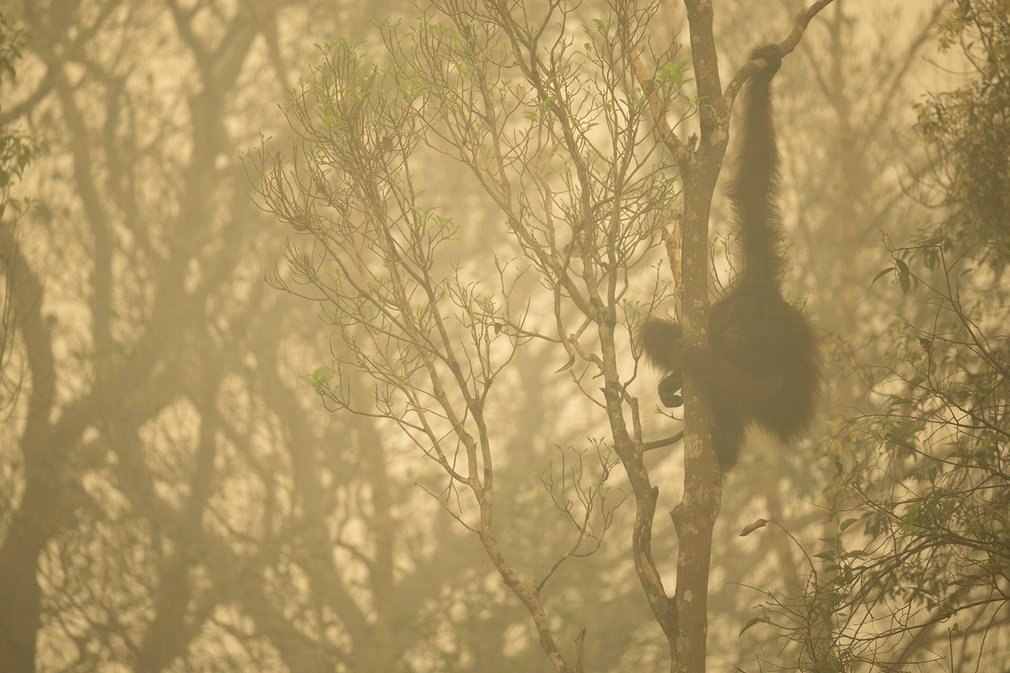 A container filled with tons of illegal ivory in Lome, Togo. Togo is seen as a new opportunity by ivory smugglers with its new deep water port. Yet, customs officers with new container scanning technology have made the efforts of these smugglers more difficult. 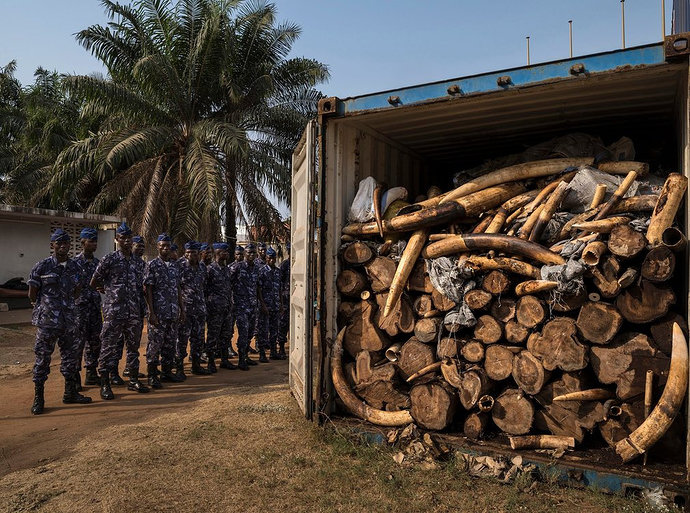 A juvenile two-banded chameleon ( Furcifer balteatus) in a recently burned landscape. Fires are often deadly for chameleons, because they can’t move fast enough to escape them. The common practice of burning the landscape at the end of every dry season has affected many species of chameleons and reduced their populations. 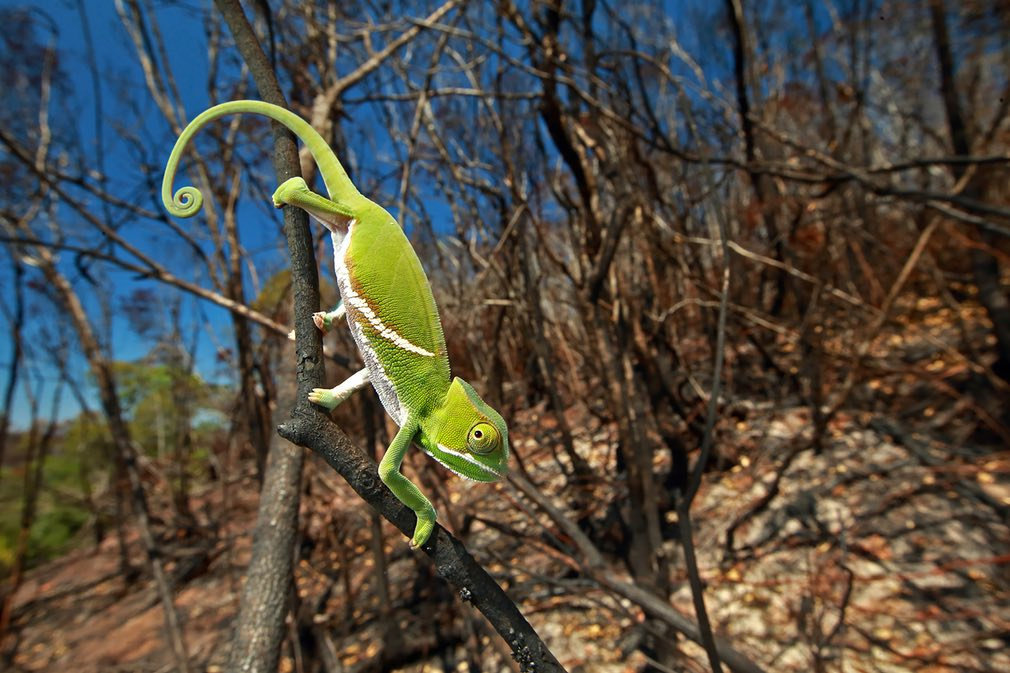 Over the years the Mediterranean’s population of seahorses has drastically reduced. Their numbers have only recovered thanks to public awareness and a significant restocking campaign. Areas of the sea have now been set aside, protected from harmful fishing methods such as trawling. This has allowed vulnerable creatures to return. 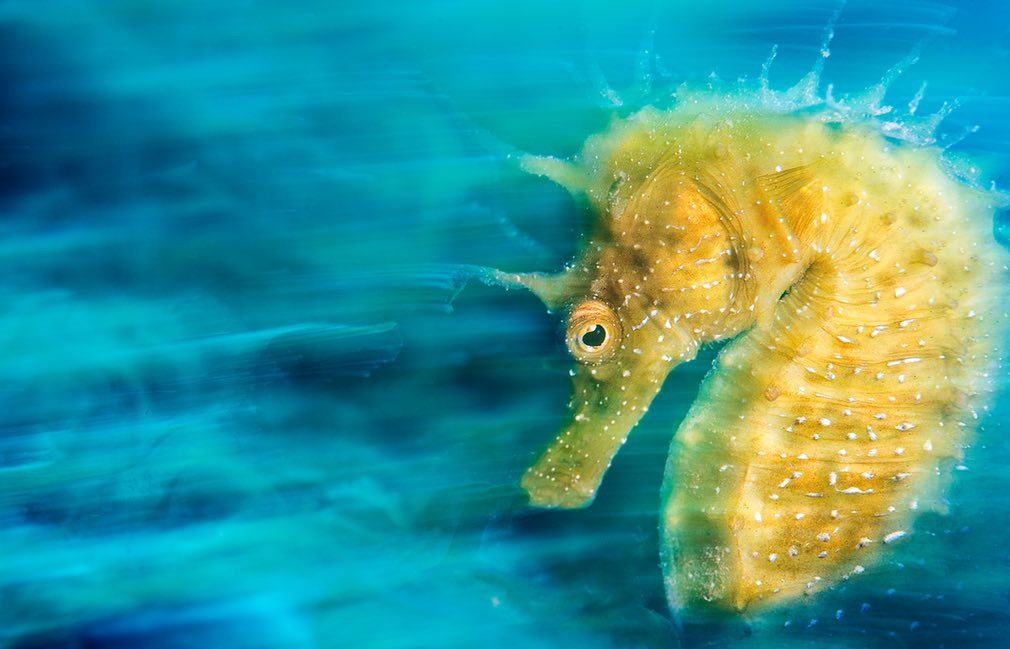 Just off a headland in this beautiful bay is a reef system favoured as a laying ground for the eggs – or ‘mermaid’s purse’ – of the small-spotted catshark ( Scyliorhinus canicula). 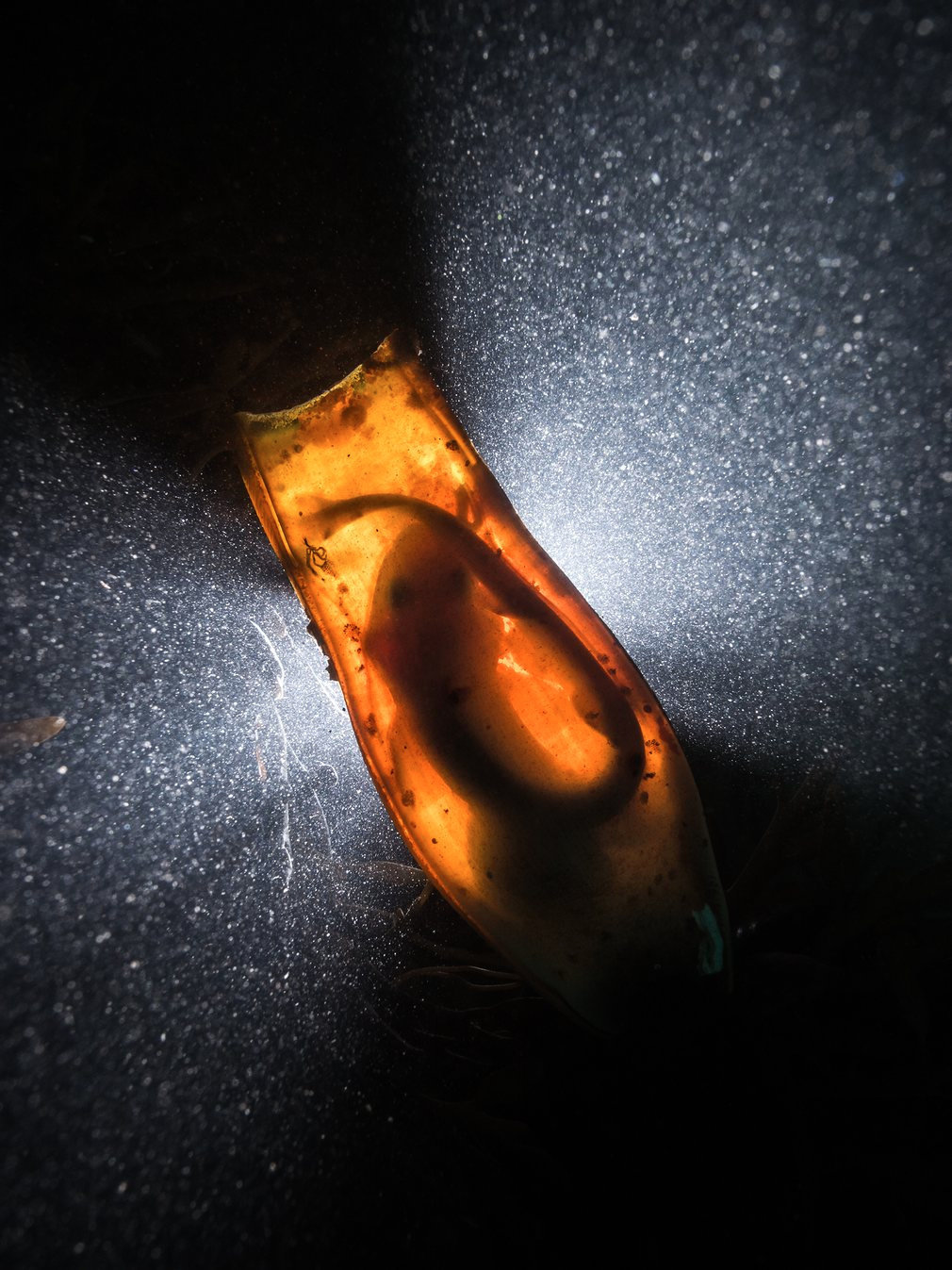 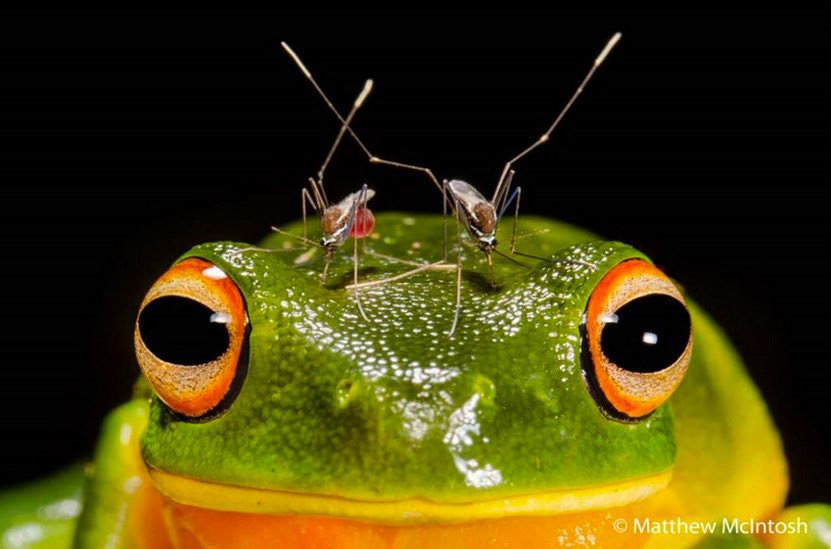 A playful humpback whale at the coast outside Tromsø, Norway, just before it begins its migration to southern latitudes. Rikardsen was also the overall winner of the GDT European Wildlife Photographer of the Year for his photo of orcas, A Breath in the Polar Night. 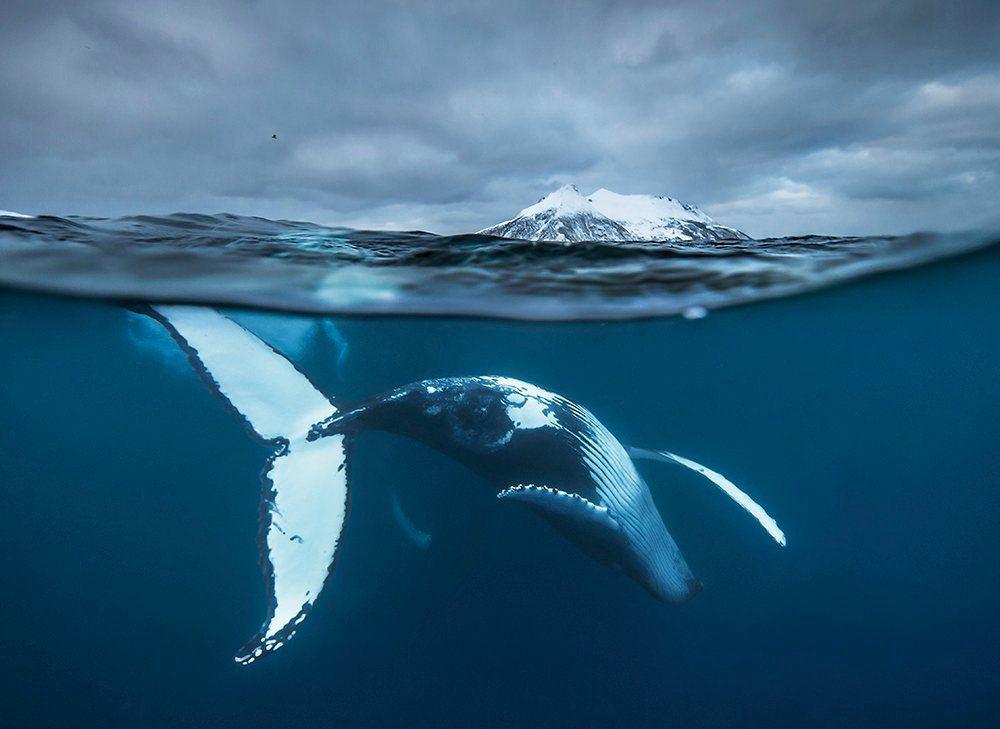 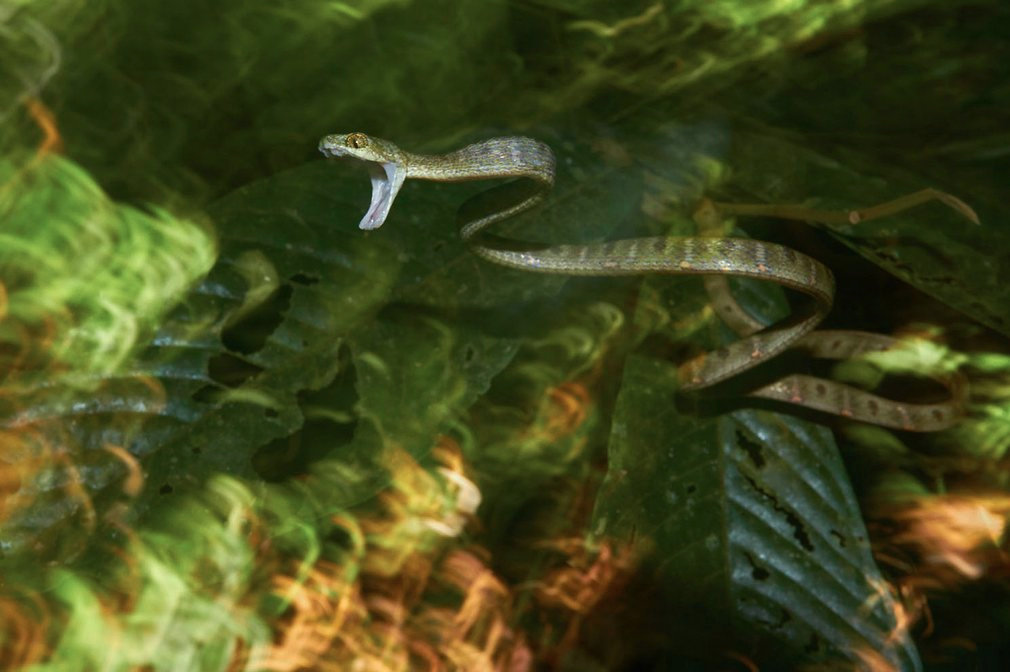 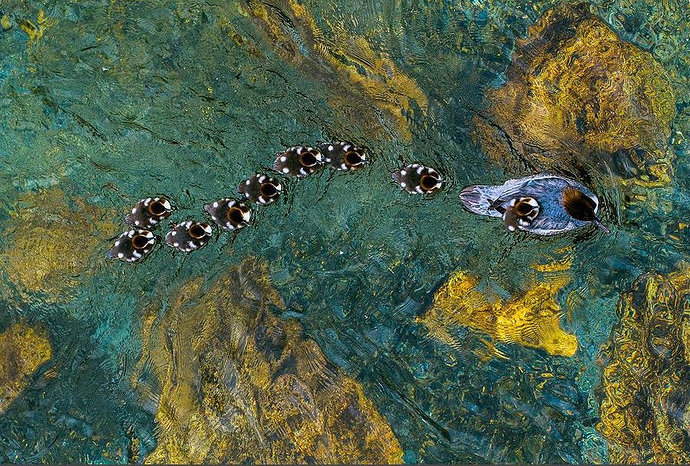 Namibia is one of the least densely populated places on Earth, a barren yet constantly changing desert landscape. In this photo, a rhino blends into ground and sky. 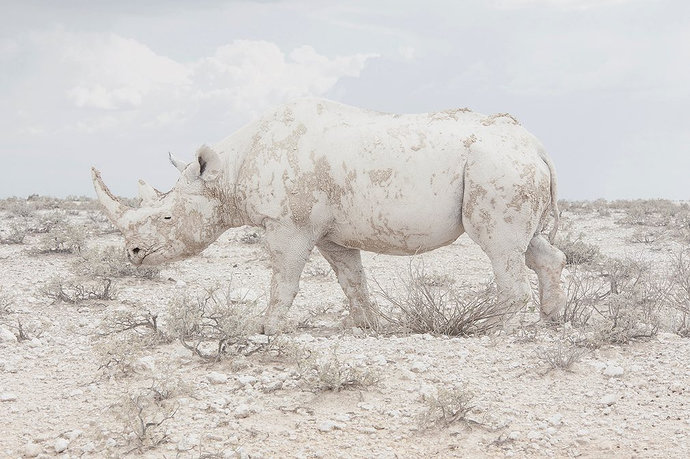